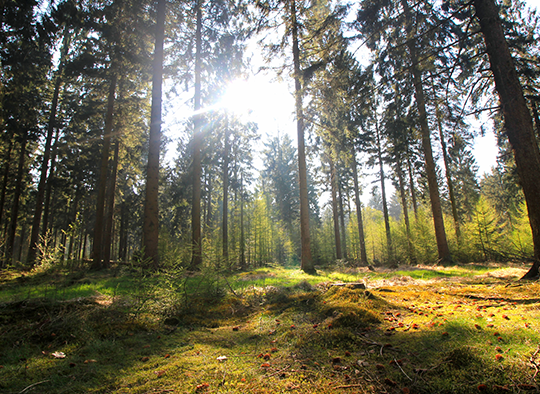 Have you ever found yourself walking through a nature preserve or forest and wondered if you truly are alone?  This fall, I hiked one of our city’s hidden trails redeveloped a decade ago after numerous rockslides closed the mountain from traffic. In the distance, I heard garbled voices and footsteps, but didn’t see anyone.

The presence of others was on my mind. After parking in the unmarked lot and finding myself on the little signed paths, I looked around at the towering cottonwoods whose leaves would hang on until spring, the feathered purple asters always a harbinger of a season’s end, and the bright moss on a felled tree. The moss was dependent on the log to take root, the aster counting on a small fraction of light seeping through taller weeds, the cottonwoods hoping the ground cover would offer them some nutrients throughout the cold.

Humans, too, exist in this fashion, communicating with one another to grow, support, to heal and enter death with grace. We can learn much about how to care for one another through the study of forests and trees.

The Forest as a Caregiver

According to Suzanne Simard, forest ecologist and author of The Mother Tree, it was once presumed trees fought against each other for light and soil. Thus, older trees were removed to make room for younger species planted further and further apart. With her latest research equating human systems to ecological ones, she’s proving that assertion wrong.

“The most powerful parts of our social systems can be the elder that has aged and is guiding younger people or guiding their culture. And yet, they can be almost invisible in the hierarchy of our social system. In forests, it’s the same thing,” she says. We don’t need to remove the older trees; we need to focus on what they provide for the younger ones. And vice versa.

While her studies have been groundbreaking in how ecologists view the lives of trees, her experience as a breast cancer survivor also formed these insights. Her children were aged 10 and 12 when she was first diagnosed. “I had to learn,” she says. From her doctors and medical staff, her friends, and her family. A steady grove of support sprouted up around her. “We came together as a system.” Through that network, she gained resiliency. Like older trees that nurture young seedlings, those who surrounded Suzanne helped as she redeveloped her sense of well-being.

In the days before my mother died, her caregivers acted in a similar manner.  They were the stalwarts, content to love and aid the woman in front of them while I often saw only frailty. Each step of the way, from the time my mother moved into a memory care community to the time of her death, the caregivers saw my mother growing more into who she was.

The Migration of Aging Loved Ones

I hiked further into the preserve and idea of trees as playing a role in how we heal, or age stayed with me.

Forests and plants communicate with one another through the exchange of water vapors, gases, and other nutrients. But what does it mean when trees undergo a resettlement? For instance, at what altitude can a Douglas Fir be transplanted if its entire life was rooted along the cool coastal waters of the Oregon Coast?

Writer Lauren Markham drove to Oregon to better understand this transplantation process. She writes, “Like humans, forests have always migrated for their survival, with new trees growing in more hospitable directions and older trees dying where they are no longer best suited to live.” So, what happens to humans when they no longer thrive where they once lived?

We move our loved ones around from home to various settings or care facilities, sometimes without identifying and mapping out their transition. To plan for varying changes in emotional and physical states. To forgo assimilation periods. Depleted after transitioning my mother from a planned care setting for the first time, I had little knowledge of her new climate, fraught as I was by responsibility and grief. By mapping out resettlement plans for trees, researchers also hope to shed light on how to best transition humans whether necessitated by physical or human nature.

Completing my hike, I forded a nearly dry creek bed and stood again the unmarked parking lot. A half dozen cars lined the gravel plot. Turns out, I hadn’t been alone. There were other travelers on this unmarked journey, and I had been surrounded by trees.

Annette Januzzi Wick is a writer, speaker, and author of I’ll Have Some of Yours, a journey of cookies and caregiving. (Three Arch Press) and is a recipient of a 2020 NSNC award. A frequent contributor to Cincinnati.com, her work has appeared in Cincinnati Magazine, nextavenue.com, Shanti Arts, 3rd Act Magazine, and others. Visit annettejwick.com to learn more.