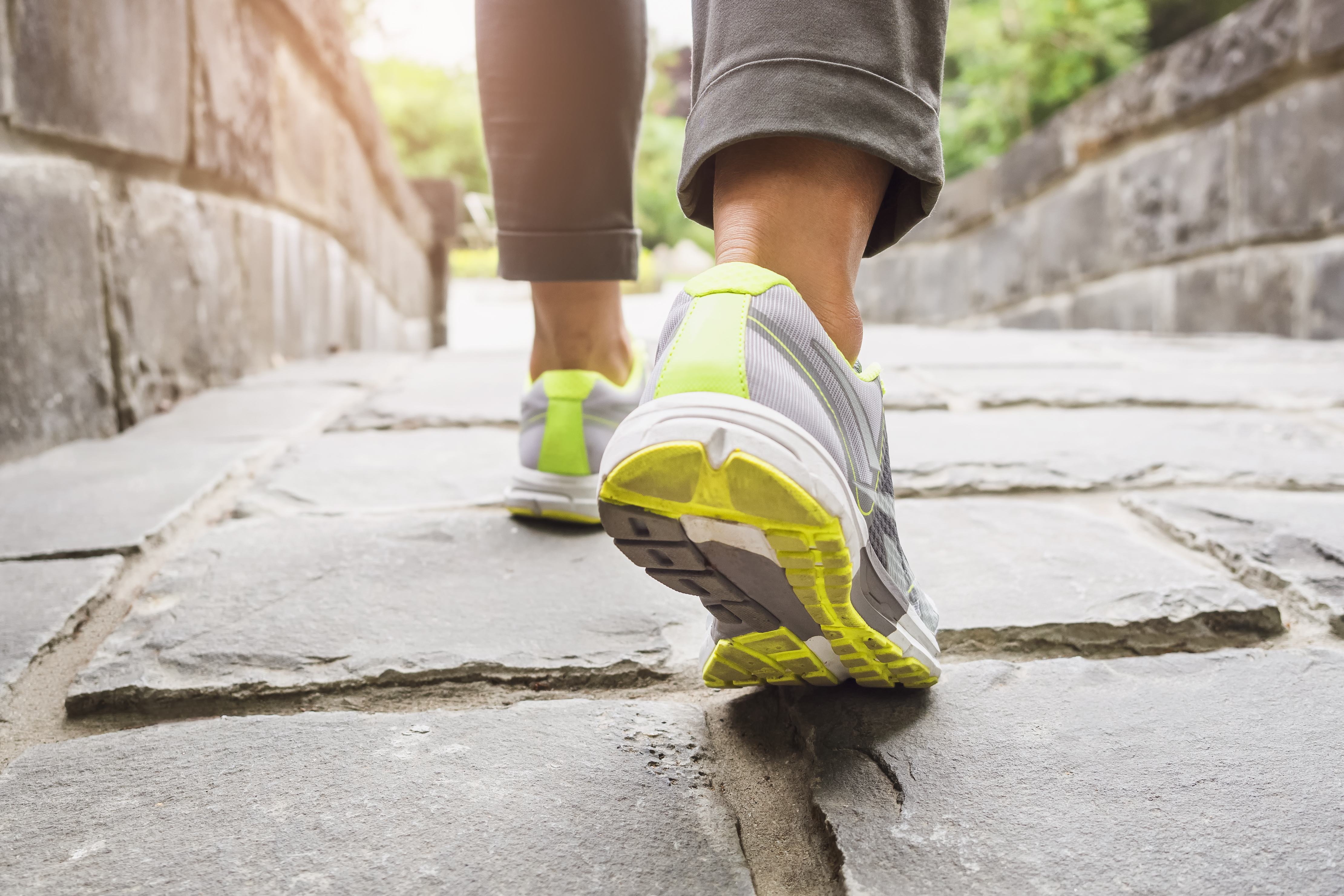 The design of my mother’s memory care community featured residential hallways and community rooms accessible via a somewhat circular path, like a hub-and-spoke system. If I could not locate her meandering down one corridor, I returned to the center and found her down the next.

Some days, my visit with her consisted of only walking. We had no destination in mind. But the walk added structure to her day and gave me a sense of purpose as her caregiver. She boosted her heartrate, and I valued the peace that washed over our strolls. We also boosted our brain power.

About the meditative practice of walking, philosopher Thich Nhat Hanh writes, “When we walk, we produce the energy of mindfulness. Instead of thinking of this or that, just be aware of the contact between your foot and the ground. If you pay attention to that contact, it’s very healing.” Walking produces energy not just for our hearts, but for our brains.

Clearing our Heads for Creativity

How many times do we utter the phrase, “I’m going for a walk to clear my head?” In the fresh air, we can let go of the prior night’s dream, an argument with the kids, or anxiety about the day ahead. Walking clears our mental space, like entering a meadow of openness and finding new ideas fluttering like butterflies in the breeze.

A 2014 study from Stanford University demonstrated that walking leads to more creative thinking when attempting to solve a problem requiring the imagination. Participants performed mental tasks such as “thinking of unusual uses for common objects or coming up with analogies to express complex ideas.” Across four experiments, 81% to 100% of participants produced more creative ideas while walking, as compared to sitting.” And when walkers sat down afterward, their creativity boost lasted.

Writers are almost always walkers who escape their everyday lives and settle inside their stories. When I announce to my husband, “I’m going for a walk,” he asks if I want company in case I’m working on a writing project. Author Susan Froetschel, who wrote Fear of Beauty, states, “Thinking about my novel requires a certain level of introspection and being alone with my thoughts.” At such times, she says, a solitary walk is often the fastest way to get from plot point A to plot point B.” Sometimes, in smaller projects, I am simply seeking the right word to describe a person, place, or thing. On walks, that word appears out of thin air.

The Matter of White Matter and the Brain

While walking and creativity are closely linked, researchers have also begun looking at walking’s physical effects on the brain.

Our brains are comprised of two types of tissue: gray and white. Most of the brain’s heavy processing occurs within gray matter. White matter makes up the bulk of the deep parts of the brain. Also, white matter, comprised of fat-wrapped nerve fibers (axons), is considered the brain’s wiring, and relays messages between the gray. We know that gray matter peaks in development when we are 11 or 12 years old, and scientists are discovering white matter keeps developing well into our 20s, and in other ways, beyond our 50s.

In a study of 250 older men and women, Agnieszka Burzynska, a professor of neuroscience and human development at Colorado State University in Fort Collins, and her associates, discovered when we’re active, white matter constantly reorganizes and restructures itself. When we’re sedentary, this same tissue frays.

Many participants found their bodies and brains had changed. In walkers and dancers, researchers found,  “Their white matter seemed renewed. In the new scans, the nerve fibers in certain portions of their brains looked larger, and any tissue lesions had shrunk. These desirable alterations were most prevalent among the walkers, who also performed better on memory tests now. The dancers, in general, did not.”

Henry David Thoreau, in a lecture later titled Walking, delivered in Connecticut in 1851, writes, “It is true, we are but faint-hearted crusaders...our expeditions are but tours, and come round again at evening to the old hearthside from which we set out.” He believed walking was a spiritual, reflective act, and wrote, “You must be born into the family of Walkers.” Since that time, scientists and writers have proved him wrong. It is not a birthright, but a necessary act we must take up to continue our crusade for a healthy brain.

Annette Januzzi Wick is a writer, speaker, and author of I’ll Have Some of Yours, a journey of cookies and caregiving. (Three Arch Press) and is a recipient of a 2020 NSNC award. A frequent contributor to Cincinnati.com, her work has appeared in Cincinnati Magazine, Shanti Arts, 3rd Act Magazine, and others. Visit annettejwick.com to learn more.