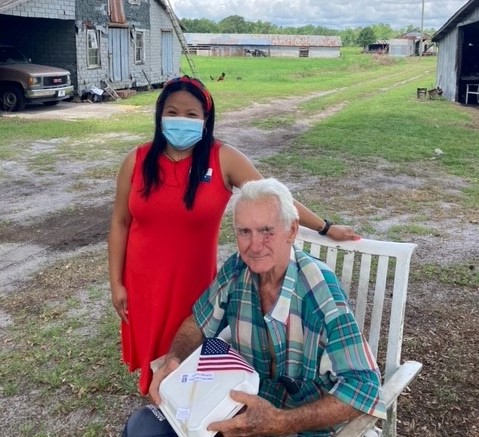 ProMedica Hospice serving The Grand Strand is proud to partner with Horry County Meals on Wheels to provide meals, smiles and support our patients and the senior population in the community.

This past Fourth of July, the Meals on Wheels delivery meal was barbecue style with a mini American flag to commemorate our Independence Day, donated by ProMedica Hospice. One of the recipients of this delivery was one of ProMedica’s own patients, Eugene, who is also an Air Force Veteran. Eugene was sitting outside enjoying the view of his farm with John, ProMedica Hospice spiritual coordinator. Blythe Bondoc, senior account liaison, delivered Eugene’s meal and he was thrilled. Eugene stated, “I’m so happy to have you all come by… all I do is sit here (under the oak tree) alone and watch the cars drive by.”

During their visit, John explained, “As we were sitting outside under the cool shade of a tree overlooking his farm, he received his mail. It was a Fourth of July card from a ProMedica Hospice volunteer. He was smiling as he read it. Eugene was grinning from ear to ear and said, ‘Thank you. This means a lot to a lonely man like me.’”

ProMedica Hospice has not only taken care of Eugene physically but emotionally and spiritually as well. Patients feel remembered when we go the extra mile with simple things such as cards, smiles and meals. He became emotional and said we made his day!