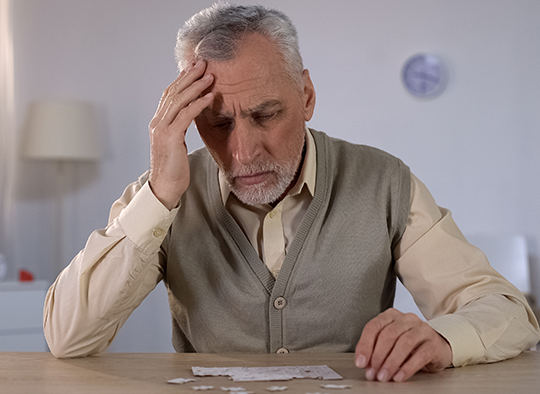 Friends and even family members would spend maybe ten minutes in conversation with my dad and walk away satisfied thinking he was perfectly fine. Their impression of him would be that I over-exaggerated my dad’s whole situation.

Have you ever had the wind knocked out of you? Indisputably, that is what it feels like. What others didn’t realize is the minute they were out of the door, my father was asking, “Who the heck were those people? What were they trying to sell us?”

Having suffered from Alzheimer’s for many years, Dad had reached a point where he had absolutely no short-term memory whatsoever. Everything started for him at that very moment--there was no before. What was happening at the present time was the only world he lived in.

Unfortunately, his long-term memory started to fade as well. There was a time when he could tell you what color sweater he was wearing on a particular day forty yesteryears ago. On the other hand, I had a conversation with him about his two youngest brothers and he had absolutely no recollection of either. Were it not for a family photo album, he probably would have accused me of lying.

He also had great difficulty recognizing our house where he’d lived for the last eighteen years. Often, he would ask if we ever spent an entire season in this cabin. I believe he was recalling a small cabin from his boyhood where he and his own father would stay overnight while cutting wood for the winter months.

There are certain matters a person living with dementia will put forward that you’re better off not questioning. One afternoon, dad kept going on about how he remembered my sister at the age of 14 and how she loved to sit on the swing chair in the front yard and was simultaneously running an auction house. Hardly! The fact of the matter was at that time, she was already the mother of three children and approaching her late thirties.

While watching a football game being played in Green Bay, Wisconsin, we noticed the weather there deteriorating into blizzard conditions. Turning his head from the television screen, he told me to call in the cat before she froze to death. Bear in mind, we lived in hot, sunny Florida.

There is one inevitable incident which crumbles every dementia caregiver. Dad finally asked me who I was. It had already happened with my sisters, mother, and practically everybody else he knew, but this was my first. No smite by the remorseless mental invader is more atrocious. I felt completely devastated as dad was altogether stolen away from me. Alas, though I’d been with him since the madness began and tried to prepare myself for this, this question came on me like a locomotive steaming down a mountain pass.

In conclusion, I really don’t know if there is anything I can do to make the road smoother for you when this happens - and it will. What I can tell you is that you’ll never really be forgotten. These dementia-related diseases prevent our loved ones from retrieving their memory at certain times. The synapsis in their brain is not firing like ours. You might leave the room, return a minute later and they’re glad to see you. Their love for you never really disappears. They just can’t retrieve it at certain innocent moments.