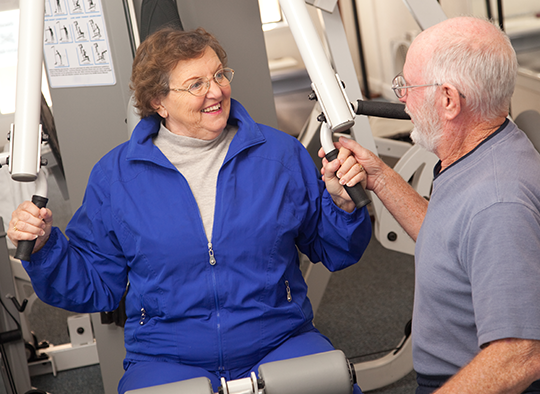 As the days become shorter, you may find your desire to do physical exercise decreasing as well. Folks have coined October 31, 2019 – January 2, 2020 as the eating season. We have less sunlight to encourage exercise, more intake of calories and an uptick on homemade coziness - a trifecta which is known to affect both mental and physical health.

Why not look at exercise as a gift to yourself?  A gift which is given long before the gift-giving season but will make the season more enjoyable and you healthier.  Change is in the air, so perhaps you decide to try an online video you have seen or a new class at the local community center.  You might want to try dancing, or tai chi or join a Silver Sneakers group.

Research shows those of us living with early dementia have perceived facilitators and barriers to exercise.1 This qualitative study revealed three themes which were barriers and influencers. The individual living with early dementia reported low intrinsic motivation and an overall non-fit of resources for their needs and preferences. The care partner used poor physical/cognitive health and transportation as influential motivators. However, motivation may be in short supply . . .

Caregivers - did you know research indicates exercise as a great non-pharmacological intervention for improving global and specific cognitive function?  In a review of research conducted in nursing homes, it was found exercise, in combination with cognitive training and activities of daily living, played a significant role in improving cognitive function.2 The research quantified the amount of exercise as 30 minutes a day within eight weeks of combined intervention.  Considering this is nursing home research, it is likely those improvements were in folks who were living in moderate to later stages of dementia.

Maybe 30 minutes seems like a long time.  Consider ways to up the amount of physical exercise by:

We may not be at the stage of life to take on a marathon training program, but we would benefit from upping our physical activity game, always with a doctor weighing in on your choices. Once your physician agrees to your plan, start by exercising a low number of minutes and slowly build up to what has been medically approved as an ideal goal.

Consider it as a gift to yourself and to your loved one—your brain and body will be grateful.

By-line:  Cate McCarty, PhD’s background in nursing, activities and admissions has given her a passionate commitment to quality of life for the individual and family with dementia.  Cate is now the care partner for her spouse who has early stage dementia of the Alzheimer’s type.