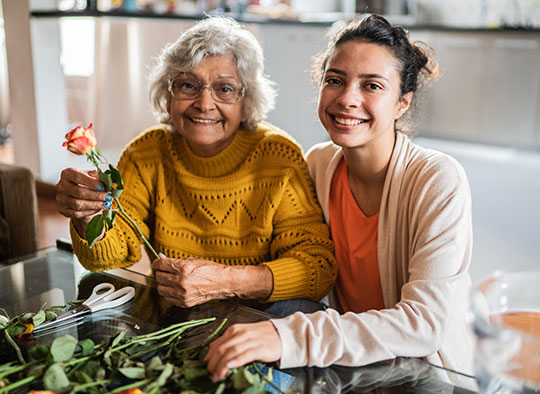 About the time my mother developed dementia, my son entered high school. For service hours, he chose to volunteer at a senior living community near his school. Twice a week, he and his classmates walked to the facility, played cards or music with the residents, and ate ice cream together.

I often suspected his choice was motivated by watching his grandmother slowly recede into the past. Later, when my mother moved closer and progressed further in her disease, my son would have the opportunity to put his new caregiving skills into practice.

Young family members are uniquely qualified to interact with aging adults. They do not have the preconceived notions, nor past regrets, which interfere with kindnesses they are capable of offering.

Tips to Involve Teens in Caregiving

Technology continues to evolve at a rapid pace. It has surpassed many of us, including me, whose degree is in computer science, but not the younger generation. They can locate information on a palm-sized computer which we cannot even read due to declining eyesight. They also have the patience in sharing their expertise (they like to gloat about it too). Many apps for iPads and iPhones exist to entertain aging adults or keep their brains engaged. Sometimes electronics are seen as a divide between young and old. In this case, tech toys and apps are bridges teens can cross to interact with older adults while also keeping themselves amused.

Cleaning is always a sticky subject in our household. My son, as was typical of most teenaged boys, did not exist in the neatest of bedrooms. His athleticism, which he liked to brag about, was put to good use in cleaning his bedroom or mowing the lawn while I busied myself caring for my mother. When finished with doctors’ visits or time with my loved one, I was free to drive him to basketball or a sleepover party. Most kids are not inclined toward chores unless the result involves something for them.

After he returned home from college during holidays, he joined me on many visits to see Mom. My mother’s face lit up at his presence. They had a unique bond when he was a baby, living somewhat far away from her. She and my father became his caregiver for a time while I took care of my first husband. Now, the tables had turned. He walked with her outside, played a few Dean Martin tunes on his iPhone for her to listen to, and made sure she was loaded down with cookies, the same way she did with him.

In my mother’s care home, there lived a woman whose grandson brought her Burger King once a week. He was about twenty years old, fresh-faced, and tall. Whenever my mother spotted him, she pointed and called out, “Hey, you!” She wasn’t after his burgers and fries. Okay, maybe she was. She was after his youthfulness—how he probably reminded her of her grandson. How the bounce in his step briefly for one moment, translated into a bounce in her heart.

While it’s important to teach our children responsibilities and respect for aging adults, it is equally important for our societal systems to recognize when a family needs more help or resources, especially if they are relying on teenaged children.

According to the American Psychological Association (APA), in a report titled, According to Young Caregivers in the U.S., over 49% of those aged 8-18 reported spending “a lot of time” caregiving. Thirty percent of those in the report helping with medications. Seventeen percent help loved ones communicate with professional caregivers. Studies also showed many of these caregivers were in single-parent, low income, minority household. In most cases, they were children and caregivers.

Studies also showed child caregivers tended to “exhibit more anxious or depressive behavior than non-caregivers, as reported by parents.” They were more likely to have trouble getting along in school, with teachers or other students.

Parenting is hard, especially when we are also “parenting our parents” or working outside the structures of caregiving to provide for our family. We want our children to have more balance in their life, while we struggle to maintain that in ours. Our children gain in compassion when they are exposed to aging adults. It should not set limits their education or well-being.

Annette Januzzi Wick is a writer, speaker, and author of I’ll Have Some of Yours, a journey of cookies and caregiving. (Three Arch Press). A frequent contributor to Cincinnati.com, her work has appeared in Cincinnati Magazine, nextavenue.com, Still Point Arts, 3rd Act Magazine, Ovunque Siamo, Belt Magazine, Creative Nonfiction, and Italian Americana (forthcoming). Visit annettejwick.com to learn more.